Data for several high-frequency indicators is now available for April and May of this year. And compared to the year-ago period, most of them are suggesting a strong rebound in economic activity. Several of them are up more than 100% YoY. This despite the country being amid the second wave of Covid infections during this period. It is tempting to argue basis this that the economy is witnessing a strong recovery. But this is misleading.

During April and May last year the Government had imposed one of the most stringent lockdowns globally. Economic activity had virtually come to a halt.

Accordingly, it was almost a certainty that activity during April-May this year would have been much higher. The question, therefore, is not whether the economy has improved but rather over its magnitude.

The simplest way to assess the magnitude of recovery is to compare activity levels with a normative period - 2019. If the level of activity in the first two months of the current financial year is above the level seen in 2019, then we can say that the economy has recovered from the Covid downturn. However, if the economic activity is below this level, then even if on a YoY basis growth appears strong, the conclusion is that the economy is still reeling under the impact

of the Covid pandemic. The table below presents this data: 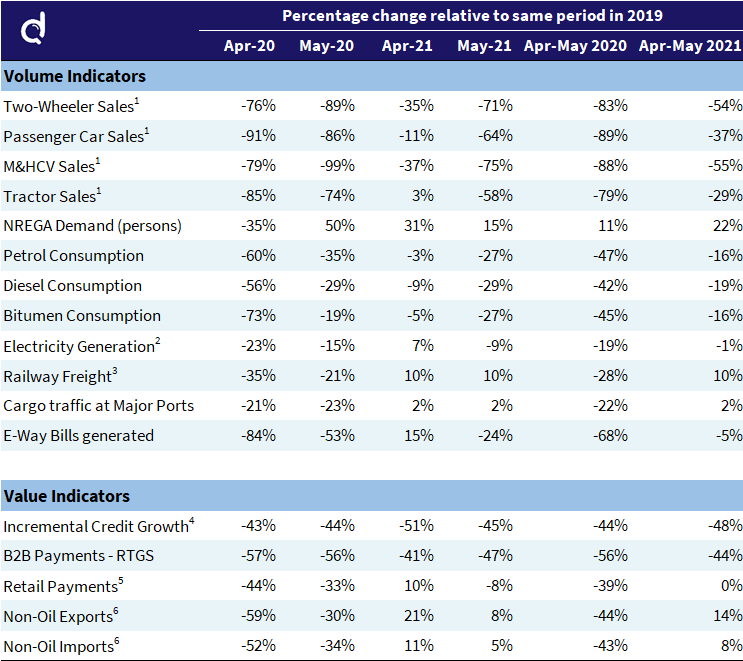 When compared with 2019, most indicators are still sharply lower, although as discussed above, the quantum of decline is far lower than 2020. Two-Wheeler and Commercial Vehicle sales in April-May this year were over 50% below the level in 2019. Car sales were down almost 40%. Petrol and Diesel consumption is also 15-20% lower when compared to 2019. Incremental credit growth has declined more this year than last year. Similarly, the decline in B2B Payments is only slightly lower than during this period last year.

That said, some indicators have seen a decent recovery. External trade is one such sector. being the most notable. Both merchandise exports and imports are higher than the 2019 level, even excluding the Oil sector (oil prices are up 100% YoY). Cargo traffic at the major ports is up 2% compared to the 2019 level and is in sync with the improvement in merchandise trade. More importantly, Exports have grown faster than Imports.

The other exception is Railway freight which is up 10% as compared to 2019. Almost a third of the incremental freight carried is Foodgrains and Cement. There is possibly an element of a shift of freight movement away from roads and to railways at play here given the sharp increase in diesel prices. Another 25% of incremental freight is Iron ore and this is largely a reflection of the buoyant Iron ore prices globally (up more than 100% YoY as of May-2021).

Retail payments have also recovered and are at the same level as in 2019. But this is most likely a reflection of more digital payments being used for payments rather than an indicator of consumption having recovered. Especially given the sharp fall in Automobile sales.

The bottom line thus seems to be that barring sectors exposed to the global economy, activity in other sectors is still materially below the ‘normative’ level, even though optically in YoY terms growth is looking strong. And this is neither surprising nor disappointing. April-May this year has seen the second wave of Covid impacting the country with several parts of the country being under a lockdown of various stringency. So, it is natural that economic activity is depressed. And as the second wave of Covid has ebbed in June and lockdowns have got lifted, economic activity has recovered. Thus sequentially, the September quarter growth will be much stronger, relative to 2019, than the June quarter.

The real question is whether growth in subsequent quarters will make up for the shortfall in growth during 1Q. As things stand currently, it looks as if GDP for the full year FY22 will be the same as in FY20, in absolute terms. This would mean over the past two years; India’s GDP has not grown. And while the financial markets may not care about it, in an emerging economy, two years of zero growth matters a lot. For one, economic growth generates income and creates wealth which in turn lifts millions out of poverty every year. Thus, Covid has left millions of people behind. And this will be an important factor that will shape government policy in the next few years.

4. Calculated as YoY growth in YoY change in credit growth

The Divergent Impact Of Covid On States

Is The Economy Seeing A Sharper Than Expected Recovery?

The Rise Of Fixed-Line Telecom Services